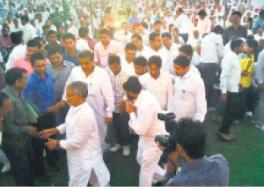 In freewheeling talks with dna Congress and BJP candidates from Jaipur Rural, CP Joshi and Rajyavardhan Singh Rathore, settle ‘rumours’, discuss key issues and their stand on where their parties stand with the people
CP Joshi interacts with supporters after kickstarting election campaigning on Friday—dna
dna correspondent

“It was Union minister of state and Jaipur Rural MP Lalchand Kataria who got the party ticket for me. It was Kataria who took feedback on my name from the party workers and it was he who convinced the high command about my victory equation. It was due to his efforts that I got the Lok Sabha ticket from Jaipur Rural.” These were the words of Congress’ Jaipur Rural candidate CP Joshi during his interaction with media on Friday.

Joshi began his election campaign on Friday by paying obeisance at Trivenidham and south blessings from Mahant Narayandas Maharaj here.

Stating that there is no groupism and factions within Rajasthan Congress, and all these are rumours spread by media, he requested the media to not print or broadcast such reports. “The party is united and all are united to secure win for the party candidates,” he said.

He said that he has begun election campaigning in the Jaipur Rural constituency and would set his priorities based on a feedback by the people during the campaign.

“Congress leader Rahul Gandhi and Centre have already stressed on development schemes for rural areas and if needed party will bring more schemes for the rural areas,” he said.

Meanwhile, Joshi also condemned all claims of a Modi wave in the state or the country. On being asked about Vaibhav Gehlot being denied a ticket, he said that there is a formula and process of ticket distribution. “Vaibhav Gehlot did not fit in that formula and thus he did not get a ticket,” he said.

Your question has been sent!

Please fill out the form below.